I hope your Halloween was safe and delicious!
Posted by Unknown at 10:29 PM No comments: 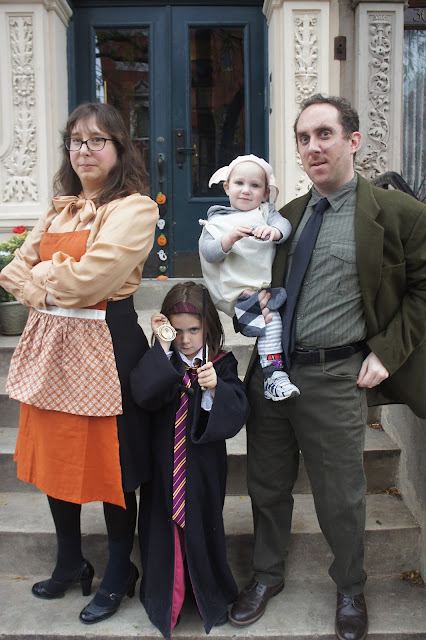 
*Jane Potter is a character that Penny made up - she is Harry's twin sister, and she goes on all of the adventures that he does.
Posted by Unknown at 9:35 PM No comments:

I found out last night that Milo's daycare was having a costume parade today, so I threw together this last minute Old McMilo "costume" together this morning. I had planned to leave to be at work on time, but the other parents convinced me to stay and parade around the block, and I am so glad I did! It was so much fun! One of the center parents decorated the movement zone, so when we all got back from the parade, it was a photo free for all! Happy early Halloween! 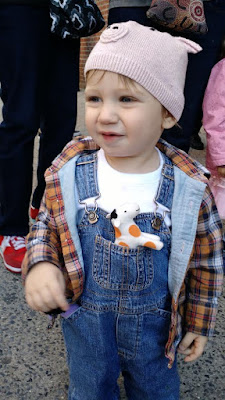 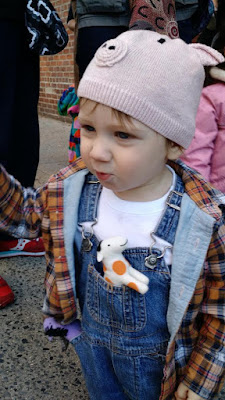 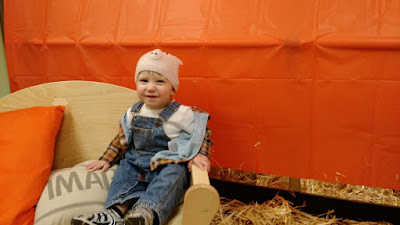 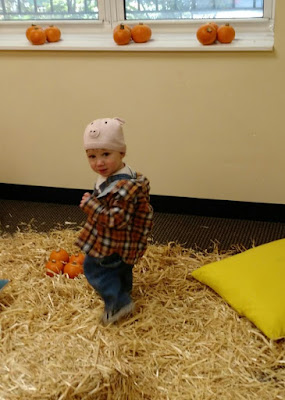 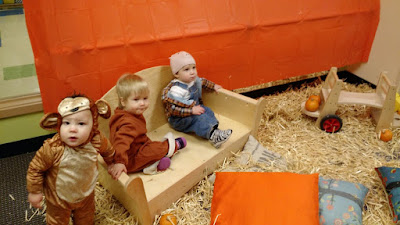 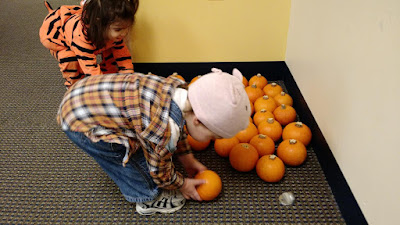 Posted by Unknown at 1:04 PM No comments:

Here's something I never thought I'd do...

About two and a half years ago, we scored an American Girl doll for Penny at a stoop sale for $10.  The girl was selling 4 or 5 of them, and Alex and I literally had $10 in cash between the two of us, or we would have bought all of them.  Luckily for Penny, her big cousin is slowly outgrowing her American Girl doll, and passing along anything she isn't using anymore, and my mom is the world's best thrift shopper, so Molly is living the life over at Chez Z.  What was undeniable about Molly, though, is that something needed to be done about her hair.  I had tried to handle it, Penny tried to manage it - no go.  Originally her hair came in braids, and somewhere along the line before we got her, the braids were taken out and it was all over by the time we got her.
Cut to Sunday.  I had been doing some online research about how to handle this hair situation, and was almost convinced I was going to pack Molly up and send her to the doll hospital, when I found out about the Hair Salon at the American Girl Place.  I was intrigued.  Alex was going to be spending the day at Comic Con, so I told Penny to pack up Molly, we put Milo in the stroller, and off we went to midtown.  There is an extensive line-waiting appointment-making receipt-showing process that took about an hour and a half altogether, during which we bought Molly a new pair of glasses (I told Penny we would be getting her hair done and a new pair of glasses, and THAT'S IT.  I could easily have spent several years' salary in there), and as Molly was discontinued a few years ago, everyone on the staff was genuinely excited to see her.  Only kind of creepy.
When our appointment time arrived, Molly was strapped into a salon chair
I also opted for the "spa treatment" package, where Molly got a thorough cleaning, and some nail stickers to take home, so the first step was rubbing her down with some special powder, and the grime that came off this doll was worth our trip into the city on its own.  Molly's hair is such that it sort of needs to be braided, so none of the fancy half updos that Penny liked would do.  However, the result was incredible: 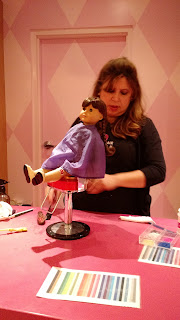 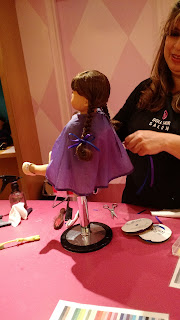 Truly, I never thought I would be this excited about getting a doll's hair done.  Certainly not THIS excited: 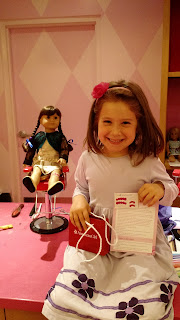 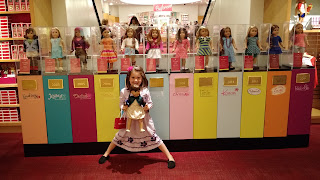 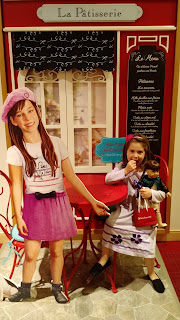 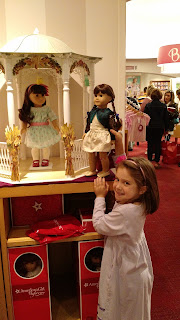 Check that off my mother-of-a-five-year-old-girl list. Luckily Milo is a super chill baby, and he only got upset at the very end of our excursion.
Posted by Unknown at 2:15 PM No comments: 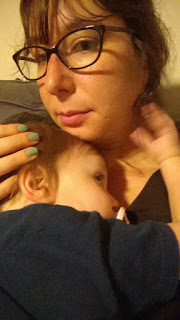 This is what I'm trying so hard to hold on to, but so afraid I will not remember.
Posted by Unknown at 7:44 PM No comments: 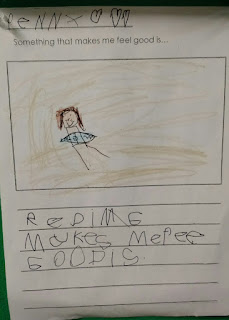 Today was our first Family Friday of First Grade, and I forgot to take photos in the room. Penny showed me all around, she read me two books, then I read her a couple. It's officially school! She's got homework almost every night! Such a big kid!

Update:  Penny was going through the photos on my phone and came across this one.  She turned to me and asked "Oh, Mommy, did you like this?" with a giant grin on her face.  She read it to me, told me about it, and it was clear she was so proud and excited to have her work on my phone.
Posted by Unknown at 1:20 PM No comments: