last night when i got home, penny decided to entertain us with her ukulele.  she played a few songs before launching into what can only be described as the most amazing song ever.  she was wandering around the living room strumming away with her eyes shut tight.  she would occasionally trip over something or stumble headlong into the coffee table.  the lyrics went:

and it was amazing.

this morning, penny alex and i were walking to camp, and she was "reading" us stories from a book she was carrying with her.  the stories were called:

each of them was presented in the same way; she told us the title, waited a beat and then began the tale.  it was awesome.
Posted by Unknown at 11:12 AM No comments:

this weekend, alex's cousin nicole got married, and penny was a flowergirl!  we started out the weekend getting mani/pedis - penny's first! 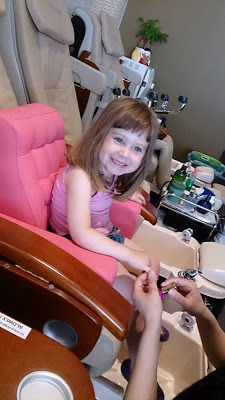 she got a color changing manicure with flowers painted on her thumbs!

we packed our bags and headed to the hamptons! 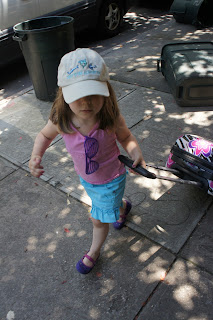 we got settled in our hotel, and then headed out to the rehearsal dinner.  penny had me turn the ribbon from our welcome gift into an ergo for her baby: 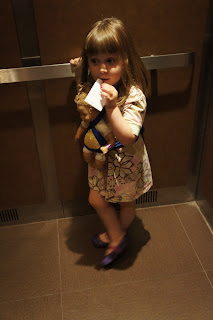 we had a lovely time, and penny got to stay up super late!
did you know that there was a long island aquarium? there is! and it was attached to our hotel!  amazing and perfect!  we spent the morning there, penny and i went swimming in the hotel pool, and then it was time to get ready for the wedding!  penny was an incredibly beautiful flower girl: 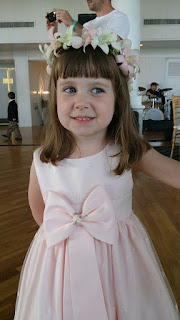 and she did a really great job!  she ended up turning the basket over to dump out the petals, in the way that only a three and a half year old can, and i'm sure it's going to make for some amazing photos.  i can't wait to see what the pro photos look like.  penny got to stay up even later, and she had ice cream for dinner!  it was a really beautiful wedding, and we thank nicole and jeremy for including penny in their special day!

we drove home on sunday, and took advantage of our zipcar to go grocery shopping in a big way!

monday was the first day of camp: 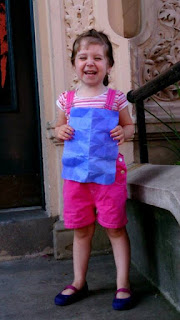 we think penny is having a good time, but she comes home so exhausted that she hasn't told us much about it.  i think that's a good sign!  i know they had a music class yesterday, and went swimming in the pool today.  hopefully we'll get more news as the summer progresses :)
Posted by Unknown at 10:20 PM No comments:

so, weeks have gone by, and i still have not finished my mother's day post.  this is unacceptable, as father's day was this past weekend.  i am going to give you a combined post, you lucky blog readers, so settle in, because i have the feeling this is going to take a while.

as you know, if you've been reading this blog for a while, we are the champions of squeezing waaaay too much into a weekend so that we don't feel like we're missing anything.  this tends to mean that by the time the weekend is over i am too exhausted to blog, then i feel guilty and i plunge into a shame spiral about blogging.  and that's ridiculous.  so before too much time passes and i forget everything that happened, let me tell you about our incredibly busy mother's day weekend.
luckily for me, i got to spend mother's day with this rock star: 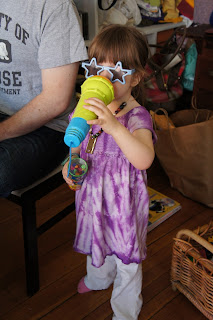 we started off the weekend with a trip to the train show at grand central terminal.  when we first got there, we though the whole thing had been cancelled due to the crowds, but it turned out that just the parade wasn't going to happen,  we made our way back to the chuggington station themed room, where we almost immediately lost alex because he had to park the stroller.  penny and i wandered around, got a coupon for a free train at toys r' us, watched them build the tallest chuggington train set ever (they built from 15 to 17 feet high while we were there), and i had had just about enough when alex decided that penny was going to win a train set.  there was an enormous crowd of kids and their parents gathered around a disney junior booth, and they were asking trivia questions about various disney jr, shows.  penny was super patient as alex masterfully worked his way to the front of the crowd, and by the time he and penny got there, they were asking jake and the neverland pirates questions.  the question was "who is captain hook afraid of?".  penny threw her hand up in the air, the host held the microphone up to her face, and she said perfectly clearly "the tick tock croc", and bam.  now we have an awesome train set.  good job, team zalben!  penny was totally proud of herself, and she deserved to be.  from there, we wandered our way uptown constantly hoping that penny would take a nap in the stroller.  did not happen.  we wandered through the park to get out of the noise.  penny said "oh, are we going to the zoo?"  we answered that we weren't going there today, and she said "but we're headed RIGHT FOR the zoo", which was true.  we basically had to walk through it to get where we were going.  but we were strong!  we walked right by!  eventually penny did fall asleep, and we arrived at our final destination for the day, alice's tea cup.  tea is by far my favorite meal of the day, and i have been dreaming of bringing a little girl to alice's since my first visit.  when you are a little girl and you go to alice's tea cup, you get to borrow a set of fairy wings while you drink your tea.  you get to make a wish and have fairy dust sprinkled on your little head.  when you order milk, it arrives in a teapot and is poured into your own teacup.  it's just magical. 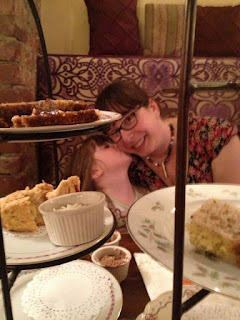 i don't know how clearly you can see the necklace i'm wearing in the photo, but it's really nice, huh?  probably alex got it for me at anthropologie or whatever, right?  NO!  penny made it in class, and there's no pasta spray painted gold on it anywhere!
day two of mother's day, actual mother's day, started out at a stoop sale where penny got to choose one of four american girl dolls - they were $10 each!  i would have bought all of them, but alex and i had to combine literally all of our cash to make $10.  we stopped at our favorite breakfast on the go spot, hungry ghost, and then continued on to the bronx zoo.  i was surprised at how many moms had the same idea we did - it was surprisingly packed!  it's always a fun time at the zoo, though, and this time we got to see a polar bear full on playing with a ball.  for serious.

gifmaker
dear penny: thank you for making me a mother.  this is the best job i've ever had.

about a month happened in between here, and then we had father's day weekend!

on saturday, we decided to head out early to the aquarium, which has recently reopened after hurricane sandy.  we got some bagels and headed out!  we measured penny, and found that she is smaller than an emperor penguin: 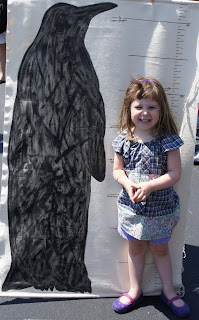 but she does a pretty convincing penguin impression.
it was ridiculously hot and a very sunny day, so we bought penny a hat. 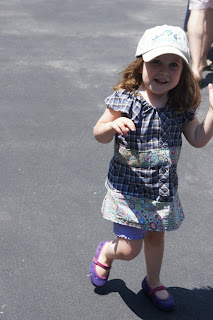 it didn't take us too long to see everything at the aquarium, so we headed out to the boardwalk to get some hotdogs, clam strips for me, and a lemonade. 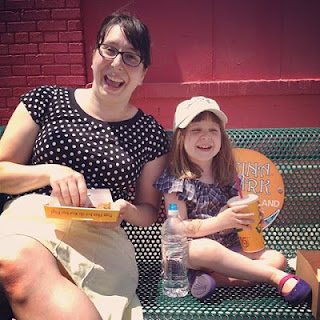 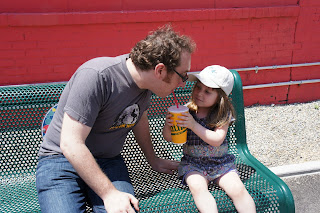 penny is now addicted to lemonade.

after lunch, penny wanted to head to the rides.  it turns out that she is a twirling, spinning speed demon!  i can't imagine where she gets it from!  we ran into a neighbor that we haven't seen in a while, so penny had a ride buddy her own size, which makes it all so much more fun! 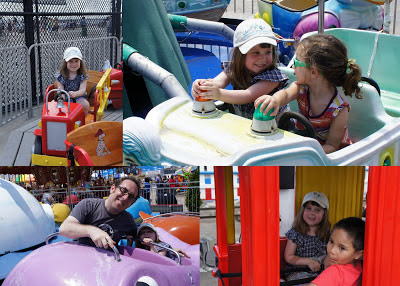 after we rode all of the rides we could handle, we headed out to the beach!  penny and i dipped our toes in the water. 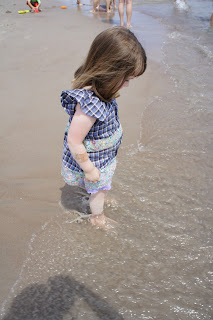 we headed home, and i got ready for my 20 year high school reunion.  that is not what this blog is about, though, so never mind.

on sunday morning, penny gave alex the present she made for him at her grandparents' house, and i made us all pancakes.  we spent the morning watching monsters, inc, had lunch at a street fair, napped, then spent the afternoon with the zalben family.

thank you for sticking with me to the end of this post!  phew!  this weekend penny will be a flowergirl in cousin nicole's wedding, and then on monday camp starts!  busy busy busy!
Posted by Unknown at 10:58 PM No comments:

yesterday was penny's junior nursery graduation.  it was exceedingly adorable, and we brought home a million crafts! we are so proud of our little student!

Posted by Unknown at 8:21 AM No comments:

meet the newest member of our family 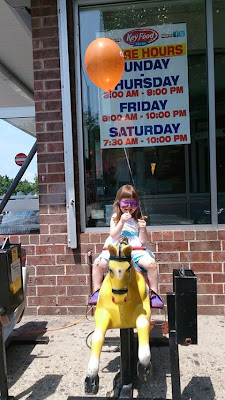 tonight at dinner, penny told me about the story of the angry duckling who turned out to actually be a goose.  i'm not sure the moral really sunk in on that one...
Posted by Unknown at 11:42 PM No comments: