and like that, another year comes to a close.  we now have a fully walking, practically talking baby, and a reading, writing, arithmetic crushing first grader living in our house.  we did lots of exciting things, took amazing trips, and learned so much about each other.  right now, alex and i are very, very tired, but it is all so worth it - we have two amazing kids, and we are looking forward to another year of adventures together.
penny's resolution is to work on lapsing into a baby voice.  milo's resolution is to learn to drink from a cup.  i am still on a quest to remember to water the plants, and alex will have an electronics free january 1st.
all of us wish all of you a happy, healthy, peaceful 2016 surrounded by those you love, doing what you love.
Posted by Unknown at 11:59 PM No comments:

Since it worked out that this week Penny had no school and I had no work, I decided that we should have some one on one time, and instituted Penny & Mama museum week!  It did not work out entirely as I had planned, but when does anything ever?
We started on Sunday at the Brooklyn Museum. 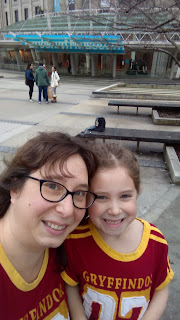 We are now members, and can go whenever!  By the time we finished signing up for our membership, Penny was pretty much done, and she had just been earlier in the week, so it was our shortest museum visit of P&MMW.
On Monday, we dropped Milo off at daycare, then met Papa Dan at the Guggenheim.  There was an Alberto Burri exhibit titled "The Trauma of Painting".  The Guggenheim was a perfect venue for this exhibit, and Penny really seemed to be paying attention and making thoughtful observations. 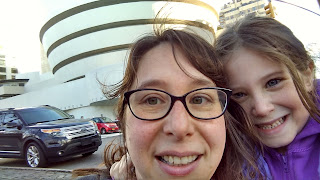 Unfortunately, after the museum, Penny started complaining that she was really cold and super exhausted.  She staggered home, where it turned out she had a fever, so she changed into pajamas and basically went straight to bed.
ALSO, Milo had been developing spots and losing his appetite.  There had been a couple of cases of coxsackie in his classroom, so they asked me to take him in to the doctor in the morning.
Tuesday, Penny spent the day on the couch for the most part, and Milo was diagnosed with coxsackie.

While Milo was napping, Penny and I took a virtual tour of the Louvre, and then watched Please Don't Eat the Pictures, day three was saved!
On Wednesday, we went to the Museum of the Moving Image. 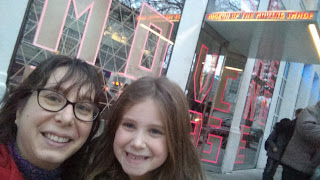 They were having screenings of the Shaun the Sheep Movie, and we met up with Grandma Ronnie (happy birthday!) and Papa Dan to watch it.  We were hoping to then join in a stop motion animation workshop, but apparently that sold out a week in advance.  We have resolved to have our own stop motion animation workshop at home starring Penny's Barbie dolls.  We had a great time looking at the museum's collection, and the Egyptian Theatre was especially fun after having just watched Please Don't Eat the Pictures.
And today, Thursday, was the final day of P&MMW, as well as the last day of 2015.  We decided to blow it all out and hit TWO museums.  Firstly, we went to the Sony Wonder Lab (almost 12 years at SPE, and I had never been!). 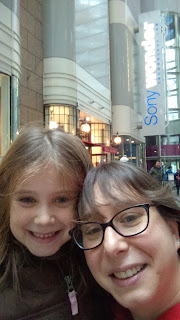 Since my work is moving in February, I figured it was now or never!  We had a great time playing with all of the exhibits, and Penny is hoping to get one more trip in before Sony Wonder closes.
Next, we went to The Museum of Modern Art. 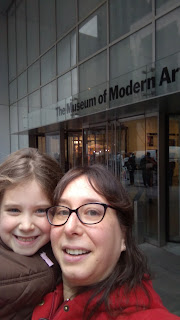 There is a hands on design studio for kids, and Penny spent a good hour designing and building this chair.  She has such incredible focus and it's great fun to watch her work. 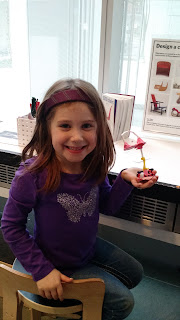 Sadly, Milo didn't have much more patience in him, so after the Pollack exhibit and one spin around the "Take an Object" exhibition, we brought P&M (with special guest star Milo) MW to a close.  This was so much fun, I am hoping to make it an annual tradition, hopefully with 200% fewer illnesses next year.
Posted by Unknown at 10:05 PM 1 comment: 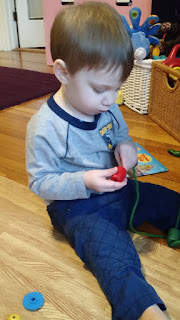 Watching him learn to do this is the best. I love watching a new skill click.

Posted by Unknown at 8:55 AM No comments: 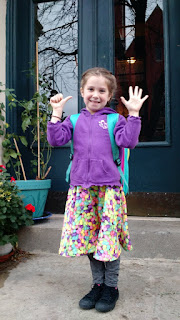 Posted by Unknown at 9:17 AM No comments:

But now I am six. And I'm clever as clever. So I think I'll be six now forever and ever.

So, here we are.  Six years old.  No longer can we count your age on one hand.  Last night we discussed transferring one of your thumbs to your other hand so that this could still be accomplished, and we talked about ideal second thumb placement and how it could be used to your advantage to play instruments, but would make holding a pencil difficult.  We've decided to keep your digits as they are for now.
This year has been the year you've discovered the joy of finding your fandom - you have become completely immersed in the worlds of Harry Potter, Star Wars, and Ivy & Bean.  We have had to ask you to put down a book to do other things on multiple occasions, and I can let you know now that few things make your dad and I happier than you asking for "just one more page" or "just to the end of this chapter" even though we have to act annoyed and keep you on target for school and meals and bedtimes.
It fills my heart to see how much love you are capable of - your careful consideration of gifts for your friends, your tolerance of your brother, and even your patience with your often slow mother give me hope that I'm doing something right.  This is the first year that I rely on you completely for reports about your day, and I treasure our time together snuggled up on the couch as you tell me all of your triumphs and disappointments.
Penny, you are funny.  Truly funny.  I would not have expected anything less from my girl with the giant twinkling eyes, but besides being expressive and intelligent, you are quick, and your timing is impeccable.  The fact that you can not only keep up with, but quite often surpass two adult professional comedians with your humor is notable.  Again, not unexpected, but still impressive every time.

I have asked you again and again to stop growing.  To stay just where you are and still fit in my lap and need me to reach things for you and have to help you, but I can feel all of that slipping away.  Five was so amazing, so full of self discovery and independence that I want to halt you right where you are so that nothing in this world can take any of that away from you.  I marvel at you.  I know there's so much awesome in store for you, and I can't wait to see it!  Happy Sixth Birthday, my girl.  I'm never going to stop hugging you too hard.
Posted by Unknown at 4:19 AM No comments:

Reading is a lot fancier when you're almost six. 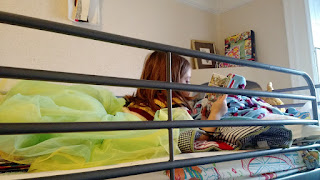 Posted by Unknown at 9:34 AM No comments:

Milo is learning words so quickly! Right now, he is obsessed with umbrellas, and he was waiting for his lunch when he invented this: