today we went to a spider-man party at midtown comics!  alex invited penny and me to the ultimate spider-man release party, and we put penny in her spider-man hoodie and off we went!  on the way, penny asked if she would meet spider-man.  "maybe he'll be there", we replied.  penny said "i'll shake his hand and say 'nice to meet you'".  then she asked "will his mommy and daddy be there?" and we had to tell her no.  then she said "maybe his uncle!"  and alex and i both cried nerd tears.
the event was fun!  penny and i wandered around the store looking at all of the stuff while alex took photos and interviewed people.  we went to lunch, and then back to the shop to watch the preview premiere of the ulitmate spider-man tv show!  it was awesome!  penny got stickers and a comic book - she could not have been happier.
(also, she had one red clip and one blue clip in her hair, because we are coordinated like that)

when we got home, we took a two and a half hour nap, then penny decided all three of her babies and i wanted tea, so we had a for-real-i-did-not-suggest-it-it-just-happened-and-i-could-not-believe-this-cliche-was-real tea party!
Posted by Unknown at 9:22 PM No comments:

this weekend we hopped in the car and went to the circus!  we have a poster from my circus days hanging over our dining table, and penny faces it every day.  the clown she knows the best, besides me, is sandor - and when she found out she was going to meet him, she was beside herself.  the only thing that made her as excited was knowing she was going to give muffins to the clowns.
patiently waiting outside the coliseum: 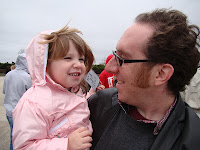 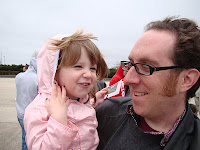 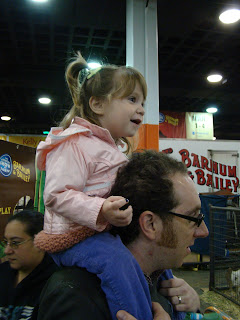 there are elephants over here.

penny had almost no interest in the adventure, which is fine.  we got to watch all of the proceedings from our seats.  the show was great!  penny spent most of the time asking "where is the ringmaster?" or "is it time to give the clowns muffins?"
after the show, we were picked up and brought back to the alley, where all the clowns were so nice to us.  penny was being very shy, but luckily, clowns know how to deal with shy kids :)  all of the swag came out of the trunks - i get the feeling our next circus trip will get her a little more comfortable with clowns.
yay for circus day! 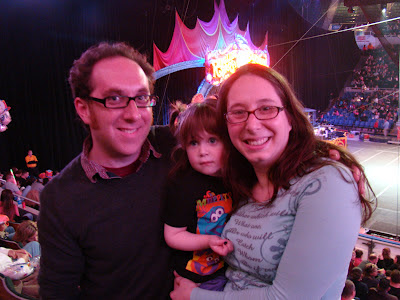 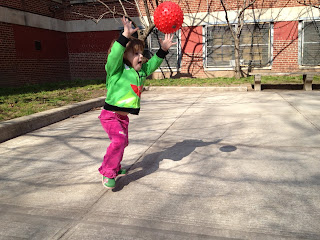 we sprung ahead, and penny's brain is still processing.  i tried to ease the shock by setting her alarm 15 minutes earlier per day for the four days leading up to the time change, but still.  her naps, her meals, everything's a little wonky.
this morning, alex and penny got on the subway with me, and after some major subway weirdness they went to the central park zoo and i went to work.  then they joined me for lunch and penny helped me out a bit - it was really nice! 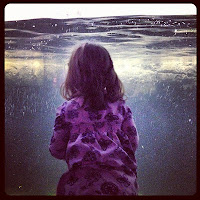 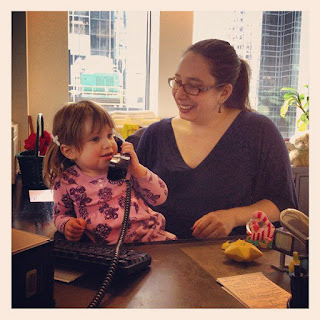 last weekend, penny and i went to the harmony playground in prospect park, where i had never been!  she and alex had been together once before - she had a great time showing me how to use all of the playground equipment :) 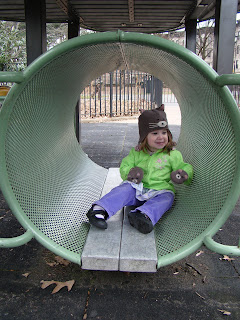 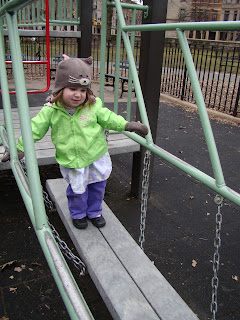 penny's grandparents brought over alex's old record player, and she has been enjoying a bit of hi-fi entertainment! 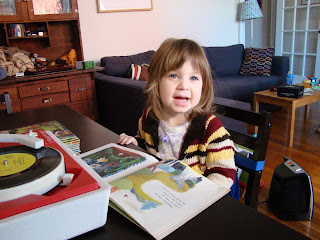 we're looking forward to spending more time outside now that the weather is warmer and we have more daylight to play in!
Posted by Unknown at 11:07 PM No comments:

Penny & Alex are at the Transit Museum! 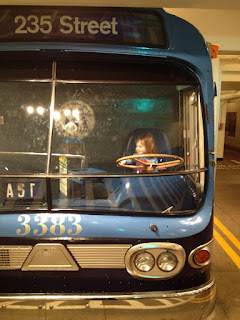